What is a reciprocating engine?

A reciprocating engine, also often known as a piston engine, is typically an engine that uses one or more reciprocating pistons to convert pressure into a rotating motion.

The 4-stroke car-engine what is it?

The four strokes, also known as the 4-cycle engine, is when the piston must complete 4 separate strokes while the crankshaft turns. 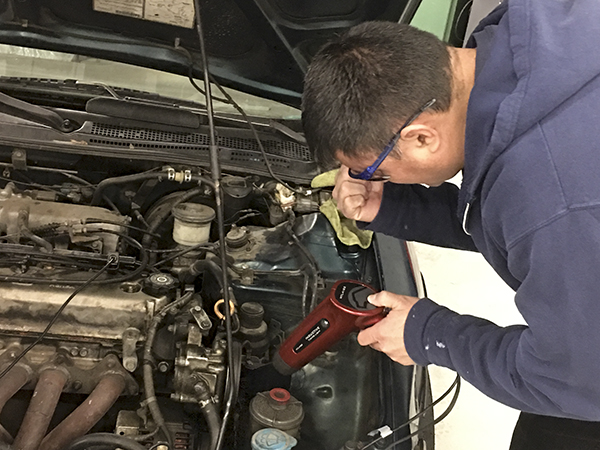 Smog Tech Class: Student learning how to check timing in the engine performance section of the class

What is a piston stroke?

It refers to the full travel of the piston along the cylinder?   Let’s review the 4 strokes for the internal combustion engine.

1.) The intake Stroke: This is the induction stroke. The intake stroke starts when the piston begins at the top dead center (TDC) in the engine block and ends at the bottom dead center.

As the piston moves down to (B.D.C) Bottom Dead Center, it creates a vacuum and pulls in the air/fuel mixture into the cylinder. During this process, the intake valve opens so the air/fuel can pass through into the engine during the intake stroke or the downward movement of the piston.

3.) The Power Stroke: This is the second revolution of the four-stroke cycle. The crankshaft has completed a full 360-degree revolution. When the piston is at T.D.C. (the end of the compression stroke), the compressed air/fuel mixture is ignited by ignition spark.  Remember, at this point, both the intake and the exhaust valves are closed.

Remember there are different banks of an engine when you have a V-6 or V-8, bank one is identified by the #1 valve or spark plug location.

Internal combustion piston car-engine (those with more than one cylinder) are usually arranged so that the cylinders are in line parallel to the crankshaft. ... Each line a car-engine has is referred to as a cylinder bank.