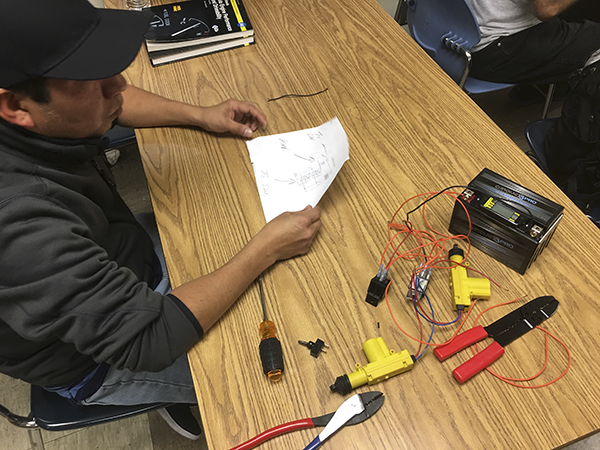 Electricity is the flow of electrons from one atom to another which surrounds the nucleus which it orbits. The center of the molecule is called the nucleus and contains the protons and neutrons.

Protons have a positive charge, and neutrons have no electrically neutral charge.  Every atom contains the same number of electrons and protons.

These are the same symbols that are in an electrical circuit to identify the ground and power sides of a circuit. Every circuit needs a positive and negative charge along with a load device and conductors for the path of current to flow along with protection devices.

Conductors have fewer than 4 electrons in their outer orbit. Copper is the most common conductor in the automotive industry because of the cost.

Examples of other conductors would be silver, gold, aluminum, and steel which is very expensive; you can see the cost of copper compared to gold is a no brainier.

Now you will need to keep the electrons in place, keep them from jumping around, hold them in place. This material is called an insulator and insulator holds the atoms tightly in place.

Insulators have more than 4 electrons in their atoms outer orbit, and this makes it easier for this material insulator to attract the electrons and not release them. Insulators can be rubber, plastic, porcelain, and rubber.

How do electrons move through a conductor?

When a battery is placed in a circuit, it is connected to the ends of each conductor wire of the load in the circuit. One end will have a positive charge (lack of electrons) and the other end negative charge (excessive electrons) on the opposite ends of the circuits.

Now current will only flow where there is only an imbalance of electrons excessive electrons at one end and a lack of electrons on the other end of the circuit.

This is how current flows in a complete circuit, “electrical pressure” remember current doesn't flow in an open circuit.

For example, a broken wire, or blown fuse, a male terminal pin inside of a connector not touching the female plug-in terminals is also considered an open circuit.

Remember in an open circuit there is no current flowing, picture coming across a bridge and there is a break in the bridge everything stops.

Amperage is the unit used to measure current flow, 6.24  Billion  Billion electrons flow fits a certain point in a second. Can you imagine anything moving that fast and trying to measure it?

The industrial circuit to measure amperage is called an amp meter. Ampere is the unit of measurement for current flow. "A" and amps are the abbreviation for amperes in today's industry.

Most people think voltage does the work, but ampere is the unit doing the work in a circuit. The actual amperes moving through a load device for an example the light bulb the amperage is doing the electrical work. A and amps are acceptable abbreviations for amps.

The force that causes electrons to flow through a conductor in known as voltage.

Ohms is the resistance to the flow of current through a conductor, and the unit of measurements is called ohms.

Resistance to the flow of electrons through a conductor is measured in ohms.

The ohms are the unit of measurement for electrical resistance; the symbol for ohms is the Greek letter omega.  The symbol used in the calculation is R, for resistance. Ohms are measured by an ohmmeter and resistance to electron flow depends on the material used as a conductor.

In this video we are discussing Voltage Drop "Don't Skip"