The points are open and close with something called a cam lopes that rotated as the lips of the points rest against. When the are points close the coil saturates or charges up, when the points open the magnetic fields collapses and the coil discharges.

When the points open and close it triggers the primary ignition circuit, which in turn fires the coil.

Inside the distributor, there is something called the rotor which rotates and deliver the spark to the correct spark plug wire which ignites the spark plug. 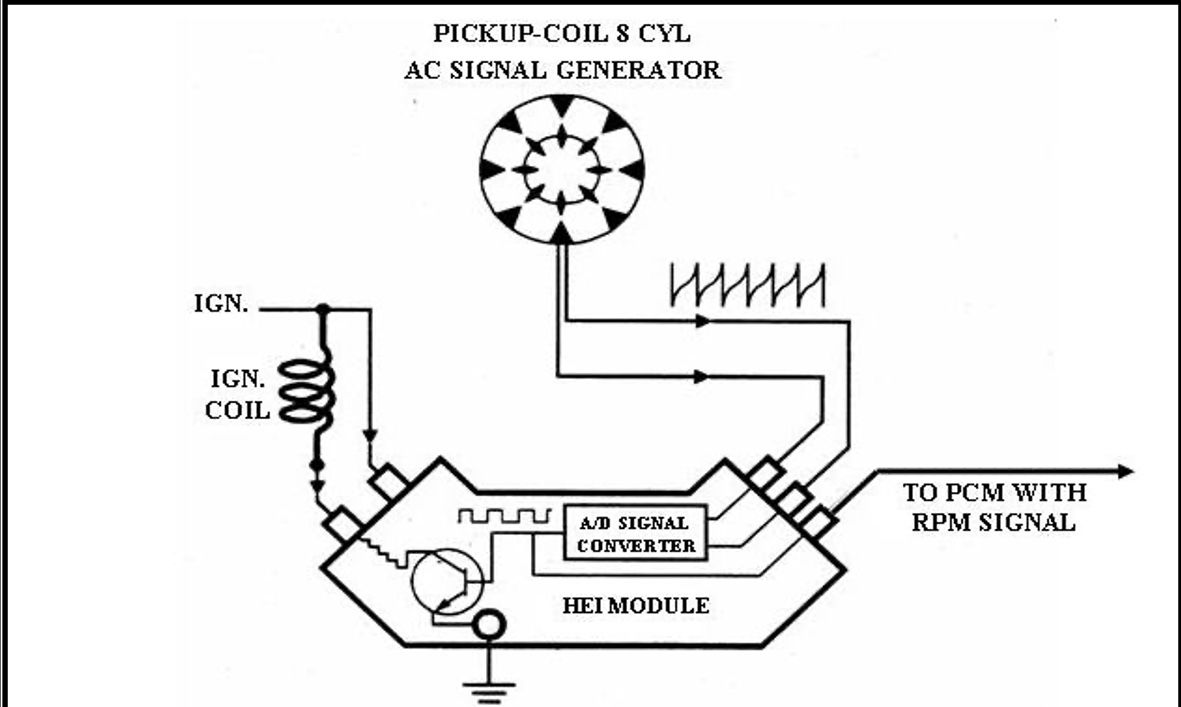 Late-model cars stop using a distributor to direct the secondary voltage to the spark plugs. The ignition coils primary circuit control, has been replace with the Powertrain Control Module (PCM)

The PCM receives inputs from the crankshaft position sensor which in turn uses this signal to control ignition timing.

Distributor ignition systems fire the coil to ignite the spark plug during the compression stroke for each cylinder.

The primary circuit of the ignition coil used to be a set of points on late model cars its some type of a transistor, the transistor is controlled by some other type of device as an ignition control module or powertrain module.

In point-type ignition systems, the current in the primary circuit is controlled by a mechanical switch.

The mechanical points was replace with a switching transistor that opens and closes the primary circuit of the ignition coil.

In modern ignition systems electronic ignition a Hall effect, a Variable Reluctance Sensor, or an optical sensor may be used to control the switching transistor.

While current is flowing in the primary circuit a magnetic field builds up in the ignition coil when the points are close or the transistor is on.

With the negative side of the coil is to engage the inductance of the ignition coil becomes saturated as the current flows through the primary coil circuit. When the primary current flow is interrupted, the magnetic field collapses quickly and a high voltage is induced in the primary winding (CEMF Counter electromotive Force).

The voltage will only build until the firing voltage of the spark plug has been reached.

Older ignition system used ballast resistors in the circuit, this was design to add resistance to the circuit to cut back on current flow in the primary ignition circuit to the ignition coil.

However, this does not happen while the car is cranking do to the low voltage from the battery while cranking, meaning the ballast resistor is being bypassed during the cranking stage.

Because the ballast resistor is being bypassed the necessary current can reach the ignition coil for proper coil saturation.

The ignition coil job is to transform a low voltage to a higher voltage with low current flow. Yes, this similar to a transformer.

The reason this can happen is do to the number of turns of wire within the coil from the Primary circuit to the Secondary windings within the ignition coil.

The coils are usually designed to have a 1 : 100 turn ratio, meaning the inductive kick of voltage when the magnetic field collapses is also 1:100 ratio.

When the current flows through the ignition coil a magnetic field is created around both coil windings. When the magnetic field collapses voltage is induced in both windings.

B. Dwell section this is when the ICM or PCM pulls the system voltage to the ground to saturate the ignition coil.

C. When the collapse of the magnetic field for the primary coil windings collapses you will get an induced voltage spike

D. The spark line is the amount of time the spark is happening at the spark plug gap

The induce spike is what was required to ionize the two gaps "spark plug and rotor gap" and the remaining energy will keep spark happening, 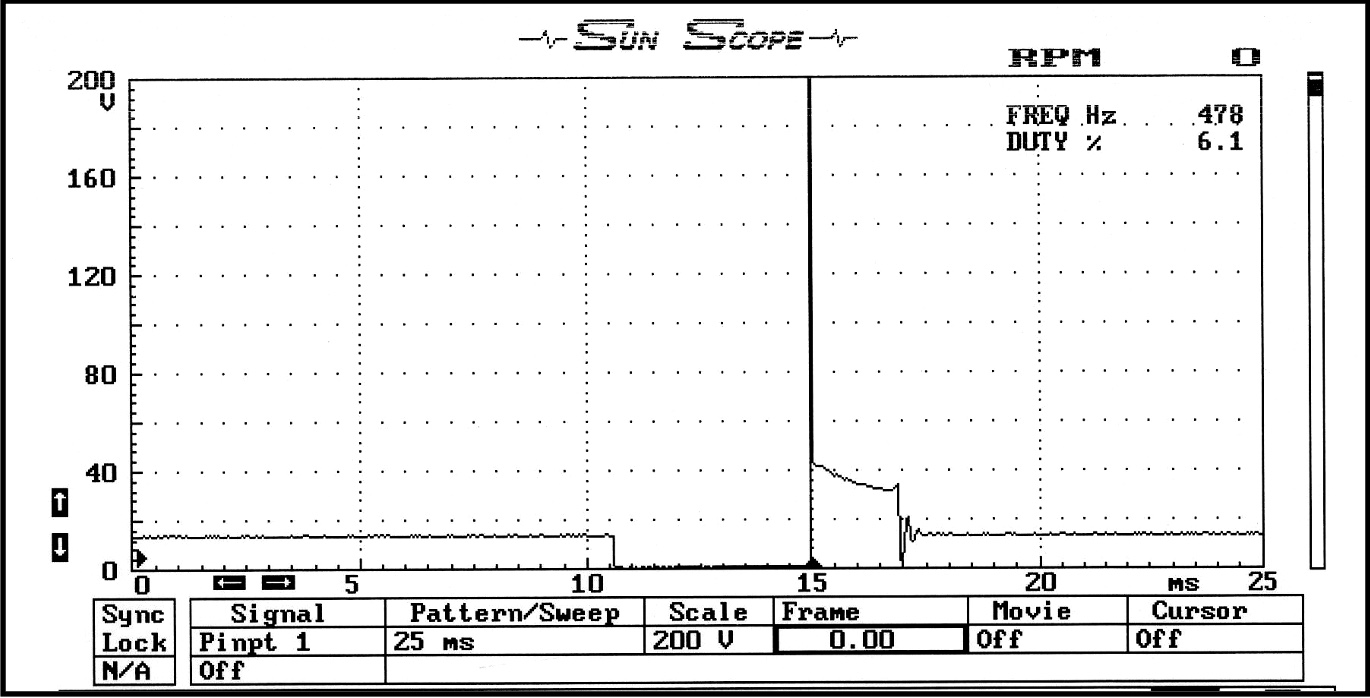 Within the ignition control module (ICM) there is a transistor that is usually a ground control switch. An NPN (Negative, Positive, Negative) transistor is an electronic switch used to control the ground side circuit for the primary ignition. 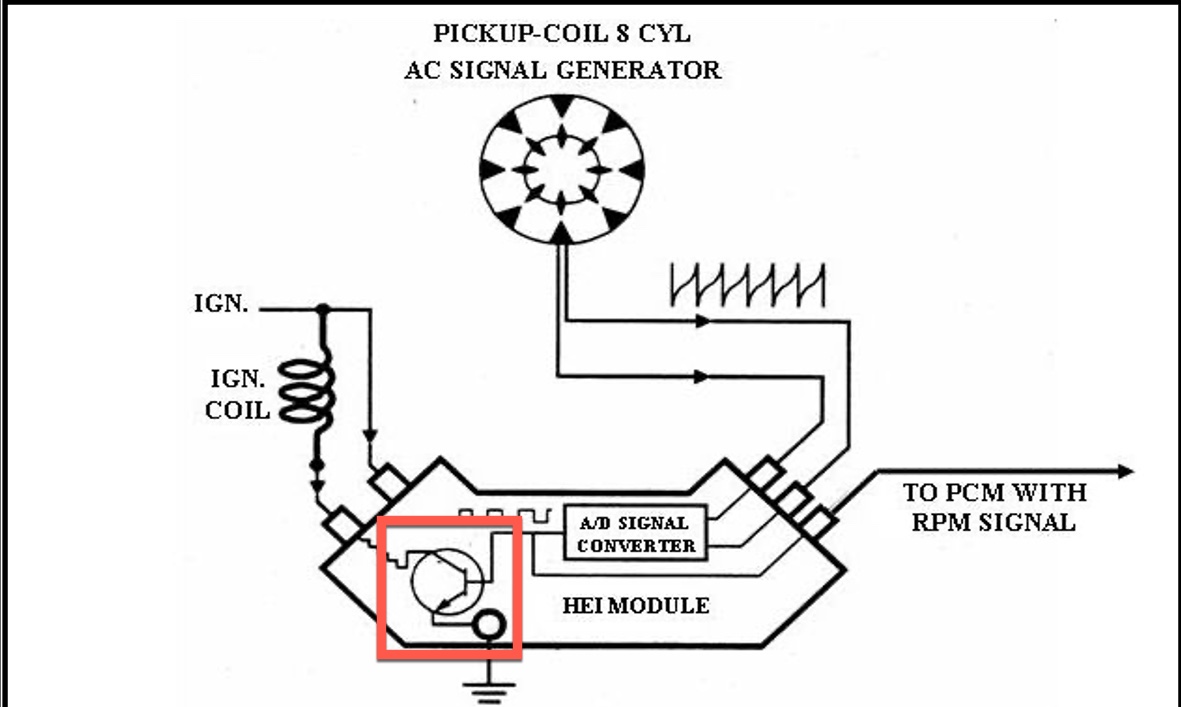 The transistor took the place of the old contact points from the distributor which open and close to control the electrical circuit.

"C' is for Collector, "E" is for Emitter and "B" is for the base which turns the transistor on and off. 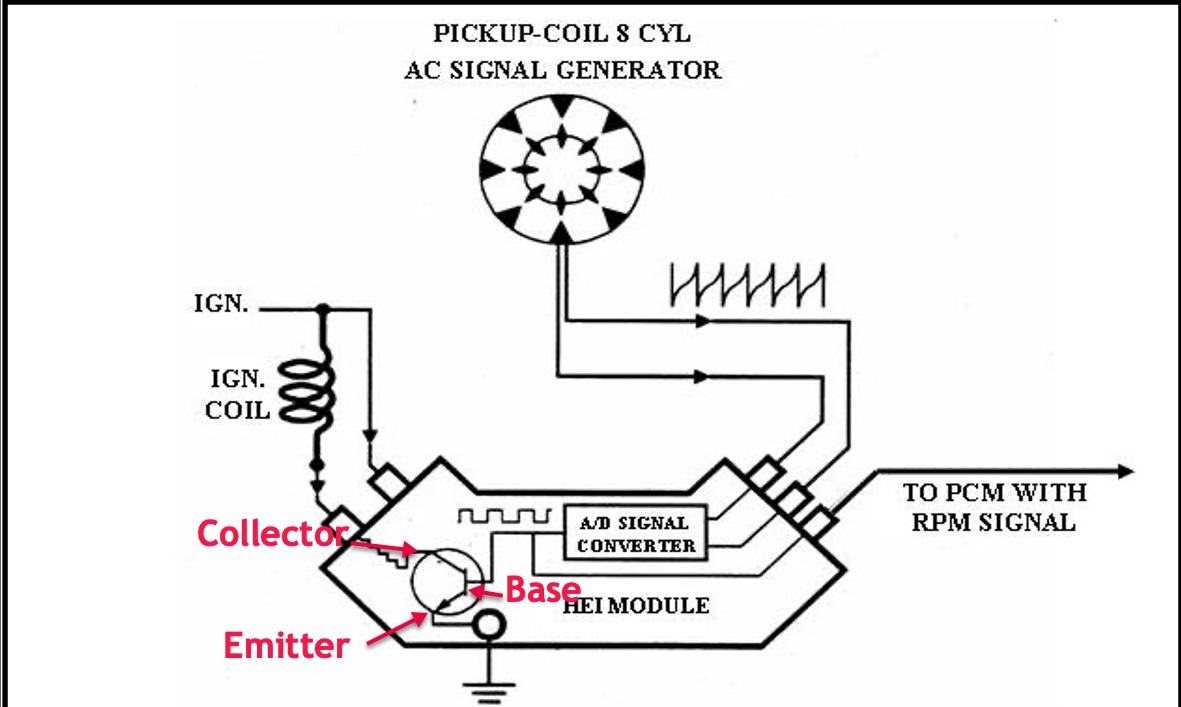 There is also a PNP (Positive, Negative, Positive) transistor which is used to control the power side of an electrical circuit.

The Emitter and Collector still carry current, but the base works differently than the NPN transistor.

There is a mini test associate with this video

Have A Great Story About This Topic?

PRIMARY IGNITION: Choose one of the subjects below (1-7) in two or three sentences in your own words explain what you have learned from this page.

Use your book from the zoom synchronous class as reference