How to identify a GM EVAP Leak

How to Identify GM EVAP Leak

EVAP system purpose is to contain fuel vapors; they are stored in a charcoal canister when they are stored. When the correct conditions are met the vapors are purge into the intake system where they are burnt.

The purpose of the Evaporative System is to contain the HC vapors from the fuel system and prevent them from escaping into the atmosphere.

The purge valve or solenoid opens when the correct conditions are met and sucks the HC or Vapors that were stored in the canister from the fuel tank and fuel system into the intake manifold.

GM EVAP Leak: it has been around since the 70's 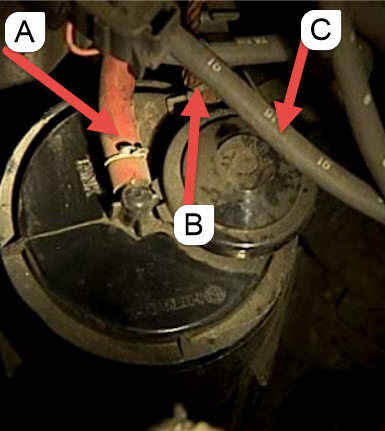 The EVAP System has been around since the 70's, but the only difference is that we could not tell if the system work. For example, if the system purges the vapors from the canister there was no way to confirm it.

If the system had a leak and vapors were escaping into the atmosphere, there was no way to know.

Not until OBD II was implemented in 1994 and was mandatory in 1996 we had no way to tell if the system was purging or had a leak.

EPA start with an none enhance system "Did not detect leaks" Enhance system detects leaks and also confirms if the system is purging.

Before testing the EVAP system, you will have to know how the system works.

The Purge Solenoid "Front Door" when this valve or Solenoid opens intake manifold vacuum draws vapors from the EVAP Canister into the intake system.

Also remember the EVAP system has a built-in leak which helps the vapors dislodge and assists the purging process.

GM EVAP Leak: What is the vent valve's job

The Vent Valve "Back Door" is always open and the only time it closes is during testing the system.

GM EVAP Leak: what about the doors

There is another door which we call the side door is the gas cap, and obviously, this is also part of the EVAP System.

OBD-II EVAP monitor job is to confirm the system is purging, and there are no leaks in the system.

This test can be performed by either using a pressure or vacuum test.

GM EVAP Leak: what is the purpose of the vent valve

During testing the vent solenoid is closed, and purging takes place in the EVAP system. The vacuum is monitored by a Fuel Tank Pressure (FTP) sensor which is located on the tank.

When vacuum achieves its target goal, the gas cap and purge valve are close, along with the vent valve.

At this point, the PCM will calculate the pressure change in the EVAP system base on the size of a leak if any.

There are many different strategies in detecting EVAP leaks:

Now you must understand there must be a strategy in confirming that the EVAP System is purging and there are no leaks.

Here are some examples that you can relate to and try to understand how the PCM can confirm the system is working.

Looking for a vacuum shift in the EVAP system

Commanding the purge valve on and seeing how the IAC, ETC reacts if the PCM doesn't see a reaction the system has a problem.

If the canister has vapors in it, and the purge valve is the command on the system will go rich, and the short term fuel will go negative.

The PCM is looking for this response if there is no response the PCM interprets this as a nonfunctional system and will set a "DTC" Diagnostic Trouble Code.

Once the PCM detects there is a leak in the system by far the best way to locate the leak is a flow meter "smoke machine."

By watching the indicator ball and how far it rises can give you the indication if there is a leak.