During the Visual inspection of the BAR-Smog-Smoke-Test you are basically looking for smoke coming from the tailpipe during this portion of the test.

Basically what you are looking for is any particular matter from the tailpipe.

• Check that there are no obvious safety hazards (abnormal engine noise, overheating, leaking fluids, etc.). Inspectors may reject a vehicle that is unsafe to test.

• Place the transmission in “Neutral” or “Park,” with the parking brake on and/or wheel chocks in place.

• Turn off all accessories (including air conditioning). • Ensure the vehicle is at normal operating temperature.

• Position the vehicle to ensure there are no drafts that can disturb the exhaust plume.

• Ensure there is nothing in the shop environment, such as equipment or tool boxes, which prevents the inspector from clearly observing the exhaust plume. In general, this will require clearing the line-of-sight as much as 15 feet from the tailpipe(s).

• Use any means necessary to enable observation of the vehicle’s exhaust plume, including but not limited to, adjusting the seat and mirror positions.

• Ensure the vehicle’s engine RPM falls between 2,000 and 3,000 while performing the first BAR Snap Test. If it does not, you can do one of the following: - Press-and-release the accelerator pedal more quickly or more slowly as needed to stay within the designated RPM range; or - Quickly press the pedal only part way to the floor before releasing it.

• Have the engine running at idle and go to the vehicle’s tailpipe. 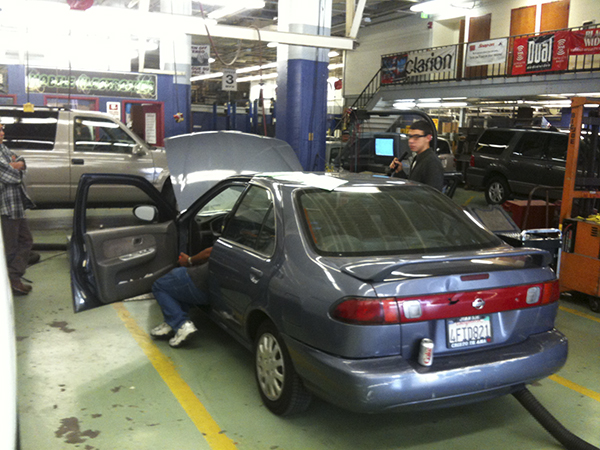 • Continue to leave the vehicle’s engine running at idle.

• Perform the third (and final) BAR Snap Test while watching for visible smoke.

• PASS the vehicle for the Visible Smoke Test portion of the Smog Check inspection if the vehicle does not emit smoke during the Idle Test, Crankcase Test, and both of the final two BAR Snap Tests.

• Gasoline - any visible smoke observed between the tailpipe and 10 feet from the tailpipe(s) on either of the final two BAR Snap Tests.

• Smoke from any area other than the vehicle’s tailpipe(s) or crankcase (PCV) system, regardless of the cause, does not constitute a failure of the Visible Smoke Test.

• No vehicle shall be failed for condensation or steam.

Step 7 – Enter the Test Results into the EIS or OIS

• For vehicles that pass all portions of the Visible Smoke Test, enter “P” (Pass).

• For vehicles that fail any portion of the Visible Smoke Test, enter “F” (Defective).

However, if the vehicle passes the visual inspection for components covered under the “Other Emission Related Controls” category, but fails any portion of the Visible Smoke Test, enter “F” (Defective) into the EIS.

Here is an example of judging the BAR-Smog-Smoke-Test during a visual inspection.

You notice smoke coming from the tailpipe prior to the test. But during the idle 10 second smoke test and the snap smoke test there is no smoke.

How would you handle this situation?

In this situation this vehicle would pass the smog inspection, because you are only judging or verifying the results during the B.A.R. snap Test.